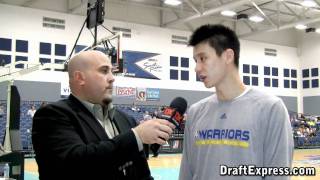 One of the few players here on assignment from a NBA franchise, Jeremy Lin flashed the same deceptive quickness and assertiveness off the dribble that we grew to expect from him at Harvard. Often bringing the ball up the floor for Reno, Lin was constantly looking for opportunities to knife into the lane. Using his quick first step and hesitation moves to get into the paint consistently, Lin was highly efficient over the two games we saw him thanks to his ability to create easy shots for himself around the rim and get to the foul line.

A combo guard in the Ivy League making the steep transition to playing the point full time in the NBA, Lin's ability to knock down shots from the perimeter, handle the ball under pressure and cut down on turnovers will dictate his chances of sticking in the NBA. With that said, his performance in the NBADL has been impressive. He has done a fine job translating the things he did well in the college game to a higher level of competition, seemingly unfazed by the bigger, more athletic players he's routinely matched up with. Lin's basketball IQ, competitiveness and overall savvy were underrated factors in his professional evaluation, and it's clear that NBA teams value them quite a bit.

Extremely tough around the basket and showing a very good understanding of his how to use screens and subtle changes of direction to turn the corner off the dribble, Lin won't land on a highlight reel any time soon, but he gets the job done in the D-League. Knocking down a couple of jumpers over the course of the week at the Showcase, it will be important for Lin to improve his ability to make shots from beyond the arc, especially with his unorthodox shooting mechanics.

The biggest knock on Lin from a NBA perspective is his lack of ideal physical tools for the defensive end. He fared well in the two games we saw on South Padre Island, but his below average wingspan and lateral quickness will be bigger concerns against the more athletic and talented offensive players he'd come across on a nightly basis in NBA play.

Shooting just 31.6% in limited action with the Warriors this season, Lin has had a much easier time scoring in the D-League, averaging nearly 20 points per-game and shooting 53% from the field. While Lin is clearly going to benefit from this experience when he returns to Golden State, he'll need to become a reliable set shooter to give himself more staying power in the NBA since he faces an uphill battle defensively. Regardless of the obstacles he faces in becoming a long-term NBA player, Lin was very very good here and left a strong impression.
Read full article

Joseph Treutlein
@DraftExpress
-Jeremy Lin had a solid first outing, showing his excellent feel for the game, unselfishness and court vision, particularly in transition finding teammates creatively. Lin struggled a bit at times to get by his man and finish around the basket, as his physical tools appear to be just average, but his size and playmaking ability were clearly evident. Lin didnt score much, converting just 4-9 from the field to go along with his six assists, and might need to show more potential as a perimeter shooter after making just 34% of his 3-pointers this season. That might be easier said than done playing alongside the very ball dominant Aubrey Coleman though, as there were quite a few possessions where he was just standing around watching Coleman dribble.
Read full article

It's not often that a player from the Ivy League conference is able to break through and establish himself as a legitimate NBA draft prospect, but that's exactly what Jeremy Lin has done this season. Strong performances against UConn (in a narrow loss) and Boston College (a road win) have propelled him directly into the national spotlight, culminating in a feature story on ESPN.com last week.

Lin's physical tools are less than ideal when compared with most NBA guard prospects, as he's a 6-3 combo guard with a narrow, but strong frame that he's absolutely made the most of, and a wingspan that appears to be below average. He has good, but not great athleticism, showing very nice quickness in the open floor and some solid leaping ability, but clearly isn't the most explosive player around.

Offensively, Lin is an exceptionally efficient player, shooting 60% from inside the arc and 37% from outside it, while getting to the free throw line at a terrific ratealmost 10 times per-40 minutes pace adjusted. He is not what you would call a stellar ball-handler, but is excellent on the pick and roll and is very aggressive looking to get to the basket.

Although he plays mostly off the ball for Harvard, he is pretty much their main facilitator and clearly the player his teammates look to early and often. He executes his team's plays extremely well and is highly unselfish, showing very nice court vision whipping crisp passes around the court confidently, always looking to make the simple, fundamental play. It would be nice to see Lin get a little more time at the point guard spot for Harvard, but based on what we can tell he seems to have very good instincts as a playmaker.

Lin's biggest weakness would clearly be his propensity for turnovers, he tends to get called an awful lot for traveling violations, and seems to struggle finishing around the rim in traffic. Lin's left-hand is noticeably weaker, both creating shots and finishing them, and he generally has trouble in the half-court if he can't beat his man initially with his very quick (and very long) first step.

As a shooter, Lin sports somewhat unorthodox mechanics, kicking his legs out violently and often fading away excessively on his pull-up jumpers, but is able to make up for that and then some with his innate shot-making ability. He doesn't take all that many shots from behind the arca little over 3.5 per game over the past three yearsbut he makes the ones he takes at a pretty solid rate, even if there is clearly room for improvement.

One thing that Lin does do exceptionally well is fill up the stat-sheet in every way possible. Besides being a terrific (and extremely efficient) scorer, he generates a large amount of rebounds, assists, steals and blocks, and beyond the numbers seems to have nice toughness and a very good feel for anticipating plays and being around the ball.

Defensively, Lin is a pretty serious guy (as he is in all aspects of the game), but there may be some question marks about his potential here at the NBA level, as he lacks great size or length, and isn't the strongest or most athletic guy in the world. This is something he will have to really work to dispel in private NBA workouts as he's matched up with other top guard prospects in one on one, two on two and three on three situations.

Lin has a number of things going for him, and is clearly a prospect teams should take note of. His gaudy stats, strong intangibles and excellent basketball IQ will all work in his favor, but he still has plenty of work ahead of him if he's to be drafted and/or make an NBA team. Strong showings against the likes of Georgetown, Seattle University and George Washington would surely help his cause, as would making the NCAA tournament, and accepting his invite to play at the Portsmouth Invitational Tournament, a place where he could really help his stock.
Read full article