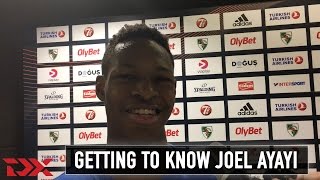 Strengths
-Good size (6' 3.5) and length (6' 7.5) for a lead guard. Fairly wide shoulders, should fill out nicely up top.
-Quick twitch athlete who appears to have untapped athletic potential  only 16 with a very thin base. Dynamic in transition. Good straight-line speed and quickness.
-Greatly improved shooter based on what we saw in Kaunas  6-of-13 from three with several of them coming off the bounce, some of the step-back variety. Has added more ways to get to his jumper off the dribble and showed a lot of confidence pulling up from well beyond the international line versus pick and roll switches.
-Raw handle but has the burst to get into the teeth of the defense to finish or kick to a shooter or drop it off to a big around the rim.
-Makes an effort to finish with either hand around the rim. Not a freak leaper but good extension thanks to his length.
-More of a combo at this stage, but has a really nice feel for the game. Plays within himself for the most part.
-Instinctual defender with quick feet. Active off the ball. Competitive on that end. Has the frame and lateral quickness to get over the top of screens when he digs in.
-Elite rebounder for his position. Will stick his nose in on the defensive glass. Quick to the ball. Loves to grab and go. 12.2 rebounds per 40 minutes.
-Good teammate who doesn't get too high or too low. Maintains a confident, steady face throughout. Speaks perfect English.

Weaknesses
-Body hasn't changed all that much. Still very thin in the lower body. Around 160 pounds.
-Handle is very raw both in the half court and in transition. Forced to settle for deep jumpers after pick and roll switches because of a lack of creativity and shot creation off the bounce. Basic handle limits his ability to handle ball pressure when he's playing at the one.
-Still learning how to change speeds and directions with consistency.
-Shot it well in Kaunas but sports a fairly low release point that needs time and space to get off. Not a very dynamic shooter  best when set, doesn't get much rise.
-Still more of a combo at this stage. Gets a lot of his assists off of miscellaneous plays. Not a traditional pick and roll or setup point guard. Played off the ball quite a bit next to Theo Maledon. Has the passing instincts to run the show just needs more experience and to tighten his handle.
-Shies away from physicality around the rim at times. Didn't get to the free throw line once in 73 minutes. Doesn't make up for lack of physicality with elite explosiveness. More quick than explosive vertically from an NBA perspective. Could benefit from adding more craft to his finishing game.
-Can be a tougher on ball defender. Lives more off of instincts and quickness than digging in, fighting over screens and using his body to keep the ball contained.

Outlook
Ayayi had a strange start to the tournament, coming off the bench for three of the four games and playing quite a limited role for the most part, at least relative to what we've seen in the past. Ayayi did go off for 19 points in 26 minutes in the final and was quite productive when called upon, but the somewhat decreased role as one of the team's best prospects was a bit mystifying. Overall it was encouraging to see Ayayi's progress as a shooter as well as his usual impact as a defender and rebounder for his position. His handle and pure point skills are still a work in progress, but the 16-year-old proved to be one of the more enticing long-term prospects in attendance.

Strengths
-Impressive physical profile for a point guard prospect. Appears to have grown to around 6' 5 and may still be growing. Solid frame up top that should continue to fill out. Above average length with a wingspan somewhere around 6' 7.
-Quick in the open floor. Loves to push in transition. Good burst in the half court. Can change speeds with force. Doesn't need a ball screen to get into the paint.
-Willing passer. Will move it ahead in transition. Capable in drive and kick/dish situations. Shows the ability to use both sides of the floor out of pick and roll at times.
-Outstanding rebounder for his position. Not afraid to mix it up inside and ignite the break himself. Averaged 10.6 rebounds per 40 minutes at the U16s.
-Streaky shooter but shows potential with his feet set. Solid wrist action. Not a non-shooter by any stretch. Will make an occasional mid-range pull up if given time and space. Mechanics are fairly sound. Has improved since Adidas Eurocamp. Made 8-of-26 threes (30.8%).
-Pesky defender with quick-twitch instincts. Excellent feet, active hands and good anticipation. 3.8 steals per 40 minutes. Gets a lot of steals roaming off the ball and making plays.
-High intangibles with a good pedigree

Weaknesses
-Good size and frame up top but is a bit light in the lower body
-Streaky shooter. Sound mechanically but doesn't have the most natural stroke. Shot preparation and speed of his release can improve.
-Still a bit raw as a ball handler. Relies more on natural quickness than advanced combo moves to get into the paint. Would benefit from sharpening his ball skills.
-Can improve his playmaking ability and floor general skills. Tends to kill his dribble in traffic. Throws high risk-low reward passes a bit too often. Can do a better job of managing the game. 4.7 turnovers per 40 minutes.
-Not super savvy in the pick and roll. The pace at which he operates out of ball screens can get better. Would be able to create more offense for himself and his teammates if he did a better job of holding the big defender and making him guard multiple defenders or snaking ball screens/keeping his defender on his back. These things should come with more experience.
-Could use a more reliable floater game as he struggles a bit to finish through contact at this stage. Quick and shifty but not a freak leaper.
-Overall still trying to find the right balance between scoring and playmaking and putting together his nice combination of skill and tools

Outlook
After getting a fairly brief look at Ayayi during 2016 Adidas Eurocamp, an extended period of time scouting him at the U16s confirmed our initial evaluation  Ayayi is a very intriguing point guard prospect who should continue to gain more and more notoriety sooner rather than later. It will be interesting to see where Ayayi ends up as the INSEP product will likely have a whole host of high level clubs after him, but regardless of his landing spot his combination of tools, skills and intangibles make him a legitimate future NBA prospect at the ripe age of 16 years old.
Read full article

2000-born French point guard Joel Ayayi turned in arguably the most impressive performance in the Next Generation game both in terms of production (25 efficiency) and long-term potential. At 6'4 with an excellent frame and long arms, Ayayi sliced and diced through the defense at will on his way to 13 points on only seven shots in 19 minutes of play. Ayayi, a French native whose parents hail from Benin, a French-speaking West African nation, has an extremely impressive blend of physical tools, ball skills, feel for the game, and competitiveness that you don't often see from a 16-year-old.

He controlled tempo from the opening tip, putting pressure on the rim in transition and finding teammates with drive and kicks, drop offs, and hook passes out of pick and roll, oftentimes using both sides of the floor. He's a very unselfish player who has the ball on a string, possesses above average court vision, and can stride his way to the rim changing speeds and directions along the way. Ayayi has room to grow as a shooter, likely his biggest flaw at the moment, but he's very capable at this stage of his development (2-fo-2 from 3 on Saturday with one bank from straightaway) and has fairly sound mechanics that are certainly workable.

In addition to his feel and offensive talent, Ayayi is a big-time competitor on the defensive end as he makes an effort to sit down in a stance and pressure the ball, get skinny and fight over screens, and finish possessions by crashing the glass (eight rebounds on Saturday). Ayayi, whose sister plays basketball for the French National Team and will be participating in the upcoming Olympics, showed some leadership skills as he was very vocal in on-court huddles and spoke articulately about his game in an interview with DraftExpress. The INSEP product may very well still be growing and is most certainly a high-level prospect worth tracking as he continues to develop.
Read full article