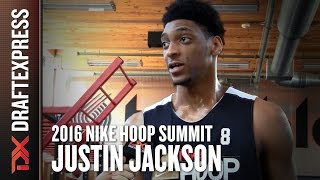 Jonathan Givony
@DraftExpress
The matchup scouts will be keying in on is at the power forward spot, between Canadian freshman Justin Jackson, and Xavier junior Trevon Bluiett. Jackson has the length and versatility to play anywhere from 3-5, and the fact that he was able to make an impressive 43% of his 3-pointers really helped spread the floor for point guard Melo Trimble. While Jackson appears to be a legitimate NBA prospect (likely more for 2018 or beyond), he has been in a serious slump as of late, which likely played a major role in Maryland limping to the finish line in Big Ten play.
Read full article

A player who has been on the radar since he was a 15-year old playing up at the U17 World Championship nearly four years ago, Justin Jackson was hampered by a nagging groin injury that relegated him to just 3 minutes in the game and made it difficult for him to show his best over the course of the week.

Jackson had some of the most impressive measurements seen from anyone at this event on either roster, standing 6'7 with an outrageous 7'3 wingspan, a 229 pound frame and gigantic hands. While not freakishly athletic, he's easily big enough to play power forward at pretty much any level, and may even be able to operate as somewhat of a small-ball 5 in the Draymond Green mold.

Jackson's perimeter shooting is one of the biggest keys to his ability to develop into a high-level NBA prospect. He shoots a set shot with a long and slow release and tons of arc underneath his jumper, but has a reasonably compact and consistent stroke that goes in at a decent rate. He still looks a ways away from developing into a prolific outside shooter, but at least has a framework to build off with the right coaching and work ethic.

Jackson has always been a solid ball-handler, and he was very aggressive looking to push the ball in the open floor and get to the basket. He has a solid first step in the half-court as well, even if he's not the most advanced ball-handler you'll find, as is still figuring out the nuances of creating high-percentage looks for himself and his teammates off the bounce. He tends to just lower his shoulder and attack the defense in a straight line regardless of what's in front of him, even though his passing ability seems to have improved over time and he can create a bit for others in drive and dish situations.

Defensively, Jackson has great tools with his strength and length, and is willing to put the effort in to get stops. He shows good instincts on the glass, in the passing lanes and even blocking shots on occasion, which could help him develop into a multi-positional defender in time as his feel for the game and experience-level improves with better coaching.

While somewhat under the radar after playing at a small school in Canada this past season, Jackson is very much an interesting prospect still who could make a significant impact at the college level as a freshman. He's currently committed to UNLV, but the recent coaching change may change things still, and there's little doubt he would get offers from anywhere in the country should he elect to reopen his recruitment.
Read full article

Justin Jackson's measurements are almost identical to those posted by Kawhi Leonard at the 2011 NBA Draft Combine when he measured 6'7 in shoes with a 227-pound frame and 7'3 wingspan albeit with far wider hands. More of a power forward than Leonard, Jackson's measurements are also quite similar to those of Draymond Green. He isn't the same caliber of prospect as either of those players at the moment, but he figures to have the ability to play multiple positions at the next level and even potentially play some small ball center.
Read full article

Strengths:
-Sports a chiseled frame at 232 pounds, and an incredibly long 7-2 wingspan. Big hands
-Fluid and mobile athlete
-Very talented offensive player. Can do a little bit of everything
- Has improved his perimeter shooting ability. Form on jump-shot is solid. Made 40% of his 3-point attempts at the U19s on a limited number of attempts.
-Can create his own shot effectively. Did quite a bit of ball-handling for Canada, in transition, isolation and pick and roll ball-handling situations
-Uses hesitation moves effectively. Uses body to create space. Has nice footwork, can spin and score inside the paint. Aggressive going to the basket. Creates contact inside the paint and gets to free throw line
-Nice touch on floaters
-Tremendous rebounder for a wing. 11 rebounds per-40 at U19s
-Has great potential defensively with fluidity, body and length
-Impressive instincts for steals and blocks. Posted over 2 per game in both categories.

Weaknesses:
-Not particularly explosive. Lacks the verticality needed to be a high-level finisher around the basket. Made only 46% of his 2-point attempts in Crete, and 19/43 overall attempts inside the paint.
-Struggles to make shots off the dribble
-Jump-shot still prone to streakiness. Release point is inconsistent at times. Mechanics get a bit rigid when tightly contested
-Decision making not always there. Tends to settle for wild shots
-Needs to improve advanced ball-handling skills, and ability to weave in and out of traffic. Tries to simply overpower defenders. Drives into brick walls.
-Feel for game is average. Not a great passer.
-Very inconsistent from game to game. Looks like a lottery pick some games, and a future D-Leaguer in others.
-Shot just 45% from free throw line in Crete. Focus level isn't always there

Outlook: Extremely talented wing (probably should have been in our shooting guard article) who alternated from impressive to frustrating seemingly without rhyme or rhythm. Undecided still on whether to enroll at UNLV next season or remain at Findlay. Neither appear to be perfect options. Needs serious structure and guidance to reach his extremely high ceiling.
Read full article

Weaknesses:
-Very poor shooter at this stage. Needs to work on shooting mechanics. Elbow locked in. Release not fluid.
-Not a great ball-handler in the half-court

Outlook: Was by far the youngest player at the U17 World Championship at just 15 years old, but had no problem competing against the older players. Was Canada's best player in many stretches. Not a brilliant scorer, but finds ways to score, primarily in transition. Very physically mature for his age. Will be very interesting to see how he continues to improve as he gets older.