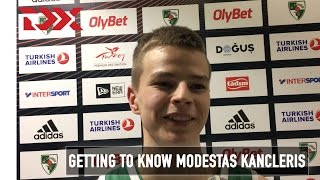 Mike Schmitz
@Mike_Schmitz
Standing 6'7.25 in shoes with a 6'9 wingspan, Lithuanian forward Modestas Kancleris played quite a bit of point guard today showing impressive ball handling, vision, and jump shooting ability for his size and age.  Already seeing minutes playing up with Zalgiris's junior teams, Kancleris appears to have a bright future as a do-it-all type who will likely continue to grow.
Read full article

Strengths
-One of the youngest players in Kaunas, Kancleris has an impressive physical profile at 6'6, with long arms, high hips, big hands, big feet and wide shoulders. He appears to still be growing and is far from reaching his peak physically. His frame should fill out really nicely in time.
-A fluid athlete with long strides, Kancleris can finish above the rim with relative ease, and likely still has a lot of untapped athletic potential.
-Played a very limited role as the team's youngest player, but showed impressive fight and a level of fearlessness against players over two years his senior. He's willing to throw his body around on the glass, take charges on the defensive end, and at least attempt to play through contact offensively. Kancleris' approach to his role and comfort ability doing the dirty work was quite refreshing given his skill set and status as a prospect.
-Defensive potential  can sit down in a stance, competes, keeps the ball in front and makes an effort to contest. 2.6 blocks per 40 minutes. Will fly around off the ball.
-Can attack in a straight line with long strides
-Smooth spot stroke out to three. Sound mechanics, ball comes out smoothly. Will be a plus shooter in time. Knocked down his only three and made all five of his free throws.
-Speaks excellent English

Weaknesses
-Very rigid handle. Plays the game a bit upright. Mostly a spot shooter or straight line driver right now. Much more comfortable shooting off the catch than off the dribble at this stage.
-Competes defensively, but has some limitations given his lack of bulk at this stage, although that will improve
-Good not great athlete

Outlook
Given his limited role it was tough to get too in-depth of a breakdown on Kancleris, but from what we did see, with his intriguing physical profile, mentality and shooting stroke, the 15-year-old appeared to be arguably the top long-term prospect on this Zalgiris team and one to absolutely keep an eye on as he develops, wherever that may be.