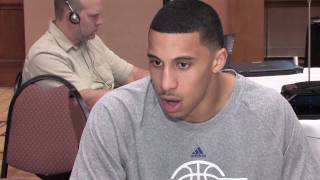 Jonathan Givony
@DraftExpress
Ryan Richards capped off a spectacular weekend from his perspective, measuring 6-10 ½ without shoes, with a 7-1 ½ wingspan. Even though he has struggled to find a long-term home for himself in Europe, the 19-year old could very well be drafted in the second round and stashed for a year or two in the D-League. Richards is one of the biggest mystery prospects in this draft after playing in Switzerland this past season. NBA teams won't have the luxury of evaluating him at the adidas EuroCamp in Treviso from what he told us.
Read full article

Jonathan Givony
@DraftExpress
Considering that the other top prospects here were pretty well known, Ryan Richards was one of the most interesting features in advance of this Nike International Junior Tournament. And while he had some productive games, he didnt blow away people with his performances, leaving some mixed feelings about his talent and feel for the game.

First of all, we have to always take into consideration his youth, as Richards is a 1991-born player, but still he surprised with a pretty strong frame for his age, especially his upper body, despite being reportedly a rather skinny guy not long ago. He stands 6-10 and could be done growing (he looks physically rather mature); its nice size, but not outstanding considering his array of skills and his average athleticism, although he does enjoy a mammoth wingspan.

Left-handed, Richards showed a decent perimeter stroke, displaying increasing consistency as the tournament advanced, from the mid-range area and out to the three-point line. However, he didnt look like a face-up player, and if hes not shooting the ball, chances are you will see him bruising in the low post. Not a finesse player, he relies on his strength, his length, some basic footwork and a certain ability to finish with his left hand, to get the job done. His footwork is pretty raw, and he really doesnt have much in the ways of moves at this point.

On defense he looked again pretty physical, and was probably the most successful player guarding the MVP Dejan Musli all tournament long. His length and size also makes him a very solid rebounder. In the team setting, his poor awareness stood out at times, though, particularly when forced to step out and hedge a screen or rotate in the post. Hes not the most reactive player youll find.

You can feel the game doesnt come easily to Richards. He doesnt look like the most naturally gifted player, and his decision making often looks underwhelming. Hes not much of a passer, and generally speaking, his team Real Madrid had a pretty disappointing showing compared to what we had witnessed in LHospitalet. Despite his very solid production, Richards might be partially to blame.
Read full article

Mike Schmidt
@DraftExpress
Richards was a late addition to the team, as he was brought over from his team in Spain to be a practice player. The 15 year old so well throughout the week in practice that the coaching staff decided to give him a jersey and suit him up for the game.

Throughout the week in practice, Richards displayed a fantastic set of all-around skills for a 15 year old. On the perimeter, he handles the ball comfortably, and can shoot the jumper all the way out to 17 feet. On the low block, Richards has footwork advanced far beyond his years. Though the lefty finishes well with his strong hand on the low block, he rarely makes on moves to the right side of the basket.

Physically, Richards already has the size for a low post player in the NBA and will likely shoot up at least a few more inches in the 4 years before he becomes eligible for the draft. The big man from London also has an excellent frame for a 15 year-old, and will likely develop more strength and athleticism in the coming years.

Though his only playing time was an afterthought to the game, Richards logged 3 minutes, becoming the youngest player ever to participate in the annual game. After making his way onto the floor, he missed a spot-up jumper and followed it up with a missed jump hook from the left block on the ensuing possession.

Richards currently plays with Gran Canaria in Spain, which will be a nice place for him to develop in the coming years. He already has the size and natural ability to become a very good basketball player. If he continues his current rate of development, Ryan Richards has the makings of a potential lottery pick in the distant future.
Read full article

Mike Schmidt
@DraftExpress
15 year old Ryan Richards out of the United Kingdom has been practicing with the team all week. According to a rumor floating around Wednesday, he has performed so well in practice that the coaching staff has asked him to play in the game on Saturday. Richards currently attends the same academy in Spain that produced Joel Freeland, and he will be the youngest player to ever step on the court at the Hoop Summit if he is indeed added to the team.

At 610 and 225 pounds, the young big man has a good body and nice touch inside. He has held his ground this week against the older and much more experienced members of the international team. Richards was born in April 24, 1991, and is currently in his first season of playing for his Spanish academy.
Read full article