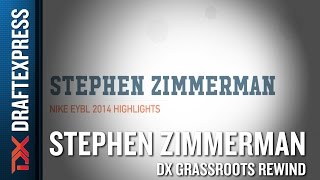 When Stephen Zimmerman decided to stay home and play for UNLV, it was a big get for head coach Dave Rice. Zimmerman, who was a consensus top-10 high school recruit, had a strong individual season for the Runnin' Rebels. He averaged 10.5 points, 8.7 rebounds, and 2.0 blocks per game in 26 minutes of action, even if the team struggled to an 8-10 Mountain West record, which ultimately cost Rice his job midway through the season.

Zimmerman measured at exactly 7' in shoes last summer at the Nike Hoop Summit, with a 7'3 wingspan and a 9'1 standing reach, giving him excellent size for either frontcourt position. Zimmerman has a slender frame, something which currently impacts his game substantially, although he does appear to have wide shoulders that could be capable of carrying additional weight with time and physical maturation.

Zimmerman spent a considerable amount of time in the post at UNLV, using over a quarter of his offensive possessions there, according to Synergy Sports Technology. Zimmerman was not ideally suited in his role as a post scorer at the collegiate level, and certainly would be in the NBA if asked to do so, at least unless he improves significantly, both in terms of his physical profile and also his skill set.

Zimmerman's post offense was primarily based off of a jump hook with his dominant left hand or a turnaround jump shot, although he did flash some more advanced moves as the season went along. He shows some touch with his hook, but could get bullied physically at times down low, with a high center of gravity and poor lower body strength, and can easily have the rhythm disrupted on his post moves because of that. He also suffers from a complete lack of confidence in his right hand, which can make him predictable at times down low.

Where Zimmerman shows more promise is as a pick-and-roll player, as he's capable both as a pick-and-pop and pick-and-dive offensive threat. When Zimmerman's able to attack the rim on a straight drive, he shows a level of explosiveness and fluidity that isn't as obvious when he's tasked with elevating off of two feet from a standstill down low, and he can make some impressive dunks and putbacks around the rim when he builds up a head of steam and attacks the paint.

As a jump shooter, Zimmerman shows decent touch, both in the midrange off pick and pop opportunities, and on turnaround jump shots out of the post. He has a little bit of an awkward release, with the ball cocked to the left side of his head. His shot mechanics are otherwise solid, as he typically gets good rotation on the ball, and has soft touch, so it's possible he can overcome this, but it could make the repeatability of his shot more difficult down the line, especially as he looks to extend that midrange shot out to the three-point line.

One other area where Zimmerman shows a lot of potential is a passer. While his 1.2 assists per 40 minutes might not jump off the stat sheet, he does a great job of keeping his head up, surveying the defense, and being aware of his options, especially when passing out of the post, where he started seeing double teams more frequently as the season went on.

On the defensive side of the court is where Zimmerman is more difficult to project. While Zimmerman swatted 2.7 blocks per 40 minutes, he's not an explosive leaper from a standstill, and lacks the elite quickness in changing direction to really play out of his area and be a great team defender.

His strength and physicality issues once again played a major factor in his defensive struggles, as Zimmerman gave up a lot of ground to the few legitimate post scorers he faced in the MWC. Zimmerman must improve his lower body and core strength if he wishes to compete at the next level, something that has to be a priority for the 19-year old going forward. Even beyond that, however, Zimmerman doesn't have the greatest technique as a post defender, frequently failing to engage his man until he already has deep post position, with an upright stance that allows for further damage to be done, and a questionable willingness to bang down low.

Those struggles showed up at times on the defensive glass as well. While Zimmerman's individual numbers were solid  9.3 defensive rebounds per 40 minutes, pace adjusted, and a 26.1 percent defensive rebounding rate UNLV struggled on the defensive glass as a team. Zimmerman was inconsistent in his responsibilities boxing out, could get pushed around against more physical frontcourt players, and struggled to really rebound out of his area all that much. With his size, and hopefully some physical maturation, this is perhaps an area he can become more consistent in down the line.

Zimmerman also showed some potential defending the pick-and-roll, although this was once again offset by inconsistency and long-term concerns. Zimmerman moves his feet adequately for a seven footer, but he could be overly aggressive at times jumping out on the ball handler, and doesn't have the elite recovery speed to make that work on a consistent basis. This is a problem that will only get worse at the NBA level when he's tasked with slowing down the elite ball handlers seen in the NBA, although as the NBA tends to shift its strategy to the big man sagging off the ball handler in an effort to minimize team rotations, limit open corner threes, and force opponents into long two-point jump shots, it's a strategy that could help Zimmerman mitigate some of his deficiencies in this regard.

Stephen Zimmerman has a number of skill sets  mobility, shooting touch, pick-and-roll potential  that are extremely sought after in the NBA, packaged with a 7' frame, solid length, and a body type that looks like it could add bulk down the line. But every positive that Zimmerman currently has is qualified with some form of concern, whether that's the need to prove he can extend his range and become more consistent in his jump shot, struggles competing physically in the paint, and concerns about his perimeter defense.

Zimmerman is stuck a little bit between positions, without the kind of rim protection decision-makers want anchoring their defense, and struggling to defend the pick and roll game in what is becoming an increasingly perimeter-oriented league.

With many areas of legitimate potential, but also plenty of areas to improve, Zimmerman is the kind of guy who could have a wide variance in where he could go come draft night. If he can continue to make progress in his jump shot, get stronger, and convince general managers that he can overcome some of his flaws, he certainly has the potential to hear his name called in the first round by Adam Silver on draft night, possibly even from the comforts of the Green Room.More DX Scouting Reports and Video Breakdowns:
-Marquette's Henry Ellenson
-LSU's Ben Simmons
-Michigan's Caris LeVert
-Louisville's Damion Lee
-Florida State's Malik Beasley
-Florida's Dorian Finney-Smith
-Cibona's Ante Zizic
-Estudiantes' Juan Hernangomez
-Oakland's Kay Felder
Read full article

Although he only played 17 minutes Zimmerman was the US Team's best big man on Saturday. He showcased his mobility and athleticism with two straight line drives and finishes over length (once vs Labissiere), knocked down a fairly deep mid-range jumper, and finished a put back. Zimmerman also did a decent job defending on the interior, collecting two steals and two blocks despite his developing frame. The US Team's big men struggled in scrimmages the week leading up to the game but Zimmerman showed up on Saturday and should be a very effective college player on both ends wherever he decides to go.
Read full article

A legitimate 7-footer in shoes, Zimmerman's closest comparison physically appears to be Chris Bosh who measured 6'11.5 in shoes with a 7'3.5 wingspan and a 225-pound frame. Zimmerman has a rather slight frame even though his weight doesn't rank particularly poor among big men selected in the lottery over the last decade. Among the players assembled here, Zimmerman is the player whose physical development is worth monitoring as his combination of size and length is already plenty intriguing.
Read full article

Jonathan Givony
@DraftExpress
Stephen Zimmerman measured 6'10 without shoes on to go along with a 7'3 wingspan. Zimmerman's 241-pound frame is the real story here, as he's gained almost 20 pounds since the Nike Skills Academy earlier this year. Zimmerman did not have a great spring or summer, as he appeared to be growing into his frame and did not seem to know how to carry the extra weight. This past weekend he certainly had a bounce in his step and was widely lauded as one of the most impressive performers in attendance.
Read full article

DraftExpress
@DraftExpress
This summer marked our first entries in the measurements database for elite 2015 high school prospect Stephen Zimmerman. He looks very impressive from a physical standpoint, coming out at 6-10 without shoes, with an excellent 7-3 wingspan
Read full article

Strengths
-Solid size and length for a power forward.
-Very mobile for his size.
-Can finish above the rim off of one foot or with momentum in transition.
-Excellent passer.
-Can handle.
-Potential as a rebounder and shot blocker.
-High IQ defender.
-Moves well laterally for his size.
-Very good shooting touch. Good in mid-range spots.
-Good touch with his left hand.

Weaknesses
-Soft.
-Gets pushed off of his spots offensively.
-Wants to shoot jump shots rather than operate on the block.
-Not a great rim protector.
-Struggles finishing through contact.
-Lacks explosiveness from a standstill position.
-Doesn't have a wide array of post moves when he is able to catch on the block.
-Right elbow doesn't bend all the way.

Outlook Very intriguing prospect due to his combination of length, mobility, shooting ability, passing instincts and overall IQ. Zimmerman most likely projects as a perimeter-oriented stretch power forward at the NBA level due to his shooting ability, handle and passing instincts combined with his lack of toughness. Zimmerman needs to improve his overall mentality and toughness in order to hang as a rebounder and defender but he should be able to carve out a niche as a skilled big man who can get up and down.
Read full article

Strengths:
-Very good size
-Mobile big man. Fluid and agile. Can run the floor and play above the rim
-Very skilled for his size
-Can put the ball on the floor in the half-court and handle in the open floor. Good first step. Can face-up for 15-17 feet and finish with nice body control
-Good shooting mechanics and touch. Has solid potential with his mid-range jumper
-Solid feel for the game. Very good passer
-Nice footwork. Quick spin moves
-Good timing as a shot-blocker

Weaknesses
-Does not have a great frame. How much stronger will he get?
-Doesn't look comfortable operating with his back to the basket
-Likes to settle for jumpers, but not consistent from outside yet
-Lacks somewhat of a meanstreak. Doesn't box out. Gets pushed around quite a bit. How tough is he?

Outlook: Agile and skilled big man with a good feel for the game. Lacks a degree of toughness and somewhat stuck between the 4 and the 5 positions.
Read full article