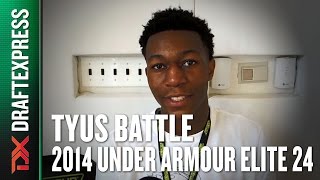 Strengths
-Very developed frame. Big shoulders. Strong lower body. Not afraid of physicality on either end of the floor.
-6' 5 with a 6' 8 wingspan  solid measurements if he's able to transition into more of a SG than a SF. Measured closer to 6'7 in shoes previously.
-Good athlete. Can play above the rim in transition. Long strides.
-Excellent defender. Moves really well laterally. Aggressive defensively. Will pressure the ball and fight over screens. Multi-positional defender at the college level.
-Brings a level of toughness to the floor. Crashes the offensive glass with regularity
-Solid pull up game. Gets good rise on his jumper. Best in mid-range spots, but can make an open three.

Weaknesses
-Fairly limited ball handler. Can change speeds a little bit but is mostly limited to basic straight line drives.
-Not comfortable creating vs pressure, especially going to his left.
-Isn't quite as explosive as he looks. Struggles to finish effectively around the basket at times
-Career 40.9% from two. Doesn't get all the way to the rim as often as you would hope. Shoots a lot of pull up jumpers.
-Can make threes but has a slight hitch on his jumper. Shoots on the way down at times. Better off the dribble.

Outlook: Battle showed out as a defensive stopper type who can get out in transition and make an occasional spot three or pull up jumper. There isn't a ton to Battle's game on the offensive end, as he has quite a bit of room to improve his shot-creation skills and shooting consistency, but the Edison native will have no problem stepping into the ACC as a freshman and defending at a high level.
Read full article