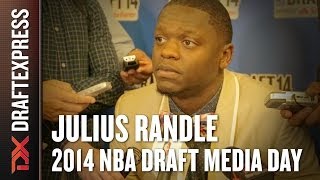 Derek Bodner
@DerekBodnerNBA
Julius Randle's situational statistics are probably a little bit different than most would expect. While 20.9% of his offense coming from post-ups is far from an insignificant amount, it ranks as only average in this group, as does the 0.79 points per possession he generated in these instances. While a little bit of improvement in Kentucky's floor spacing could have opened up the paint a little bit more for Randle and helped improve this number some, further refinement of his skills and becoming more comfortable using his right hand will be needed in the future as well. The 39.3% he shot on post-up opportunities was well below average among power forwards we looked at, although the overall efficiency was buoyed by his ability to draw contact and get to the line, as he drew shooting fouls on 26.2% of his post-up possessions, one of the better rates among this group.

Where Randle was most dominant was on the offensive glass. The 2.4 possessions per game Randle generated off of put back attempts was the second best in this group among players that we currently project to be drafted, only slightly behind Khem Birch's 2.7 possessions per game, and the 1.21 points per possession Randle scored off of these created opportunities was the third best in the group. Randle's high volume and efficiency in put back situations resulted in 114 points for the Wildcats last season, one of the top marks in the entire country among all players, prospect or not.

Another area where Randle showed potential was as an isolation threat, as the only collegiate prospect among this group who used more possessions per game in isolation situations than Randle was Dwight Powell. While his efficiency wasn't all that great at 0.76 points per possession -- hurt somewhat by turnovers, predictability due to an unrefined right hand, and by not being much of a threat shooting away from the basket -- should Randle improve in any or all of these areas, he will have a quickness advantage against most of his defenders at the next level, and could really expand this part of his game.

Jump shooting is another area of his game that stands out, as he shot only 17.3% on jump shots logged by Synergy, with the 0.40 points per possession he scored on those attempts being the lowest mark in this power forward class. He didn't attempt very many at only 1.3 shots per game, but him being a complete lack of a threat outside of the paint is something that is currently holding his game back. His free throw shooting (70.6% on 289 attempts) gives some optimism for the future, but that didn't translate in live ball situations last year at Kentucky.
Read full article

Mike Schmitz
@Mike_Schmitz
A detailed video by Mike Schmitz analysis of how Julius Randle performed in his match ups against the length and athleticism Adreian Payne and Montrezl Harrell.
More Situational Videos from Mike Schmitz
Joel Embiid vs NBA Caliber Centers Video Analysis
Andrew Wiggins vs Marcus Smart Take a look at our brand new video section for a compilation of all the videos we've produced this year.
Read full article

Mike Schmitz
@Mike_Schmitz
Julius Randle: Randle was criticized for much of his freshman year for a low steal and block rate, which many attributed to having short arms. He put that rumor to rest by registering a 7-foot wingspan, more than adequate for his 6-9 (in shoes), 250-pound frame, even if his standing reach leaves something to be desired at 8-9 1/2. The 6-9 250 pound Randle measured similarly to Kevin Love, who came in at 6-7 ¾ without shoes, 255 pounds, with a 6-11 ¼ wingspan and 8-10 standing reach.
Read full article

Mike Schmitz
@Mike_Schmitz
Julius Randle has been dominant at times nine games into his freshman season, averaging 18 points and 12 rebounds per contest thus far, shooting 55% from 2-point range and getting to the free throw line over nine times per game.
-NBA Draft Prospect of the Week: Jabari Parker (Video Scouting Report)
-Revisiting Nikola Mirotic (Video Scouting Report)
Randle's Kentucky squad is still finding their way as a team, having lost their two toughest games thus far in close neutral floor losses to Michigan State and Baylor, but still have plenty of time to come together with a challenging schedule in front of them the next four months.

Playing on some of the biggest platforms of college basketball thus far has given us ample opportunity to evaluate Randle's very distinct strengths and weaknesses as a prospect, which we've done in the following video scouting report courtesy of Mike Schmitz.

Strengths:
-Measured 6-10 in shoes, and 240 pounds at the Nike Skills Academies
-Outstanding athlete in terms of fluidity, agility and explosiveness
-Great first step. Tremendous ball-handler for size, with excellent body control slithering his way around opponents
-Rare combination of finesse and power
-Unstoppable mismatch threat at high school level. Too strong for forwards to handle inside, and too skilled for big men to stop from the perimeter
-Draws fouls, gets to the free throw line prolifically
-Spins, and finishes through contact, bounces off opponents
-Has a back to basket game. Can post up
-Tremendous footwork for a player his age
-Absolutely lethal in transition
-Competes on defense
-Willing to compete inside the paint
-Done a great job with body

Weaknesses:
-No real fundamentals on defense
-Has the type of body that can get out shape quickly
-Should continue to expand the range on his jump-shot in time. Will make him much more dangerous in the half-court if opponents need to respect him out to the 3-point line.
-Turnover prone at times. Tends to just bully his way to the basket, usually works at high school level, won't be the same story in college

Outlook:
Extremely unique prospect due to his combination of size, strength, scoring instincts and ball-handling skills. Very difficult to find players with his skill-set, at any level of competition. Has work to do, on the defensive end in particular, but he's clearly a top-notch prospect for the NBA.

Julius Randle's (#2 Scout, #4 Rivals, #3 ESPN) Prestenwood squad lost by 30 points to a very deep Oak Hill Academy team, with most of his 23 points coming in garbage time. Nevertheless, we've been able to get a very good feel for Randle's strengths and weaknesses watching him over the past year or so, and have always came away fairly impressed.

Randle sports an unbelievable frame for a 17-year old, to go along with good size at 6-9, but just an average wingspan at 6-10 (measured at the Nike Skills Academy).

Playing the face-up power forward position that seems to be incredibly en-vogue in today's basketball, Randle is a very fluid and mobile athlete with soft hands and outstanding scoring instincts, posing a tremendous mismatch threat for opponents every time he steps on the floor.

A very talented ball-handler, Randle has an excellent first step and an array of shot-creating skills he can utilize in the mid or high post. Very left hand dominant, he shows terrific footwork and creativity on his drives, both in the half-court and in transition, mixing in jab-steps, crossovers, spins and other advanced moves. With his strong frame, nimble feet, excellent body control, and solid leaping ability, he can finish aggressively through contact in traffic and gets to the free throw line at a very good rate.

Randle has good mechanics on his jumper and is a threat to catch and shoot with range out to the 3-point line. With that said, he tends to prefer slashing all the way to the rim and at times will force the issue driving and spinning into brick walls. A natural lefty, he can become a bit predictable for defenders since he's much better with this hand, and isn't a great passer to boot.

Showing the ability to post up inside, Randle should be able to do significant damage with his back to the basket in time with his terrific footwork and touch. Right now he gets a little too caught up in showing off his perimeter skills, though, and doesn't always fully utilize this part of his game.

Just an average defender, at best, at this stage, Randle's fundamentals and awareness will need plenty of work if he is to reach his full potential on this end down the road. He regularly takes plays off, doesn't get in any type of stance, and reaches excessively  issues that we often see in players this age. His conditioning appears to be just average at this point as well, something he'll likely want to shore up by the time he lands in college.

Randle might fancy himself as being somewhat of a small forward, but at his size and with the way his body is developing, that might not be ideal for his long-term development, as it appears he'd be a far more potent weapon at the 4. Comparisons to Al Harrington and Terrence Jones are already making the rounds, and Randle's scoring ability seems to justify them.

Considered one of the top prospects in a loaded 2013 high school class, Randle will be drawing plenty of attention from scouts the moment he steps on a college campus.
Read full article