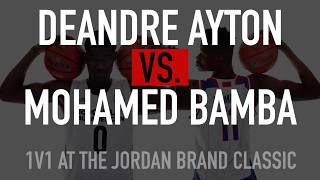 
Strengths
-Elite physical profile for a center prospect at 7'0, with a 7' 9 wingspan and a 9' 6 standing reach. Very light in his lower body (216 pounds) but has wide shoulders that are bound to fill out really nicely in time.
-Super light on his feet running the floor. Extremely fluid for his size. Quick diving to the rim. Lob target thanks to his massive reach. Can get up in space.
-Has the tools to be a monster defensively. Nimble enough to step out and switch ball screens, space defending and using his huge reach to contest. Quick enough to recover to blocks at the rim if beat. Length and quick leaping should help him develop into an excellent rim protector. Good instincts and timing. Lifetime 4.1 blocks per 40 minutes. Figures to have an immediate impact on the defensive end if he's willing to embrace that role and play with consistent energy.
-Doesn't find a body but uses his tools to gobble up rebounds on both ends - 16.2 boards per 40 minutes. Quick to the ball. Huge rebounding radius.
-Solid IQ on the floor. Very intellectual off the floor. Can high low pass. Finds cutters out of the post. Knows how to play.
-Solid shooting mechanics for his size. Shoots it a little flat but the ball comes out OK. Has good rotation. 68.9 career free throw percentage. May not develop into an NBA 3-point shooter but should at the very least become a respectable mid-range shooter.
-Solid footwork in the post. Can make a right-hand jump hook. Has touch around the rim.
-Has the agility to straight line drive in space.
-Incredible upside given his tools, defensive versatility, budding offensive skill set and overall IQ.

Weaknesses
-Thin in his lower body. Still only 216 pounds. Not a very physical guy.
-Motor really runs hot and cold. Looks disinterested at times. Walks around, doesn't jog off the court when subbed out.
-Needs to play with more toughness to maximize his defensive potential. Gets posted up without much resistance. Defensive fundamentals have room to improve. Bites on fakes. Doesn't take great angles on the perimeter.
-Over-thinks the game at times. Can play a more reactionary game.
-Shoots it a bit flat. Forward jumper. Cocked back, off to the side of his head.
-Can develop more of a go-to move on the block. Falls away, avoids contact. Can add more to his mid-post, face up game. Would benefit from a consistent face up jumper, rip through spin finish.
-Struggles to finish in a crowd at times. Needs to be in space to get off the floor. Avoids contact.
-Stands and watches on the defensive glass. Doesn't want to find a body. Relies on tools more than fundamentals.
-Not the most durable guy. Gets dinged up easily. Can he stay healthy long term?

Outlook
Bamba is a tantalizing prospect with #1 pick type upside who often leaves scouts and executives wanting more. On one hand, his tools are other-worldly and his two-way potential is unquestioned. In an era where length, agility, IQ and touch are coveted, Bamba checks all the boxes and has a monstrous ceiling that other top prospects simply can't match. On the other hand, far too many big-time prospects have failed to live up to expectations due to a hot-cold motor and semi-disinterested approach, a skill that is harder to develop over time than others. Bamba has yet to make his college decision, but going somewhere where he'll be tested, and forced to compete on a day-to-day basis should go a long way in helping him maximize his potential on both ends of the floor. If Bamba can find the inner-dog and compete on a consistent basis, he has a chance to develop into one of the more unique centers in the NBA some day. If Bamba is willing to skate by on tools along, it will may be hard for NBA teams to take the plunge and draft him as high as his upside suggests.
Read full article

Strengths
-Absolute physical specimen of a human being. Measured 6'11 in shoes, with a ridiculous 7'8 wingspan. Also has gigantic hands
-Very thin at the moment, but has big shoulders and should have very little problem filling out his frame long term
-Impressive athlete, even though he's nowhere close to reaching his full potential physically
-Mobile and agile. Can run the floor and elevate quickly around the basket
-Excellent finisher around the basket. Has good hands and barely needs to jump to dunk
-Has enormous potential defensively with combination of size, length and instincts
-Can get in a low stance and move his feet. Steps out to the perimeter impressively. Contests shots from 10 feet away seemingly.
-Great potential as a rebounder. Gets to loose balls that most players can't dream of
-Has a bit of an edge to him. Likes to compete
-Articulate and intelligent off the court

Weaknesses
-Feel for the game is a work in progress. Lacks significant strength and experience. Has a long ways to go still
-Very raw offensively. Doesn't have any real ability to score inside the post. Lacks significant lower body strength so can't establish any type of position or back anyone down, even players much smaller than him. Wants to dribble every time he catches it
-Doesn't really know how to utilize his athleticism. Looks somewhat awkward with his movements at times. Still at a very early stage of his development physically
-Confidence, motor tends to waver. Goes through spurts where he doesn't play as hard as he should. Gets down on himself easily.

Outlook: Extremely raw, but had arguably the highest upside of any player in attendance. Really struggled the first day, but came back strong and showed some very impressive things in the second and last day of the Camp. Will draw some inevitable comparisons to Rudy Gobert.
Read full article

Harlem-born, with Ivory Coast roots, big man Mohamed Bamba and his 7' 8 wingspan took scouts and media members by storm at the Nike Academy, as his mere physical profile made him the most intriguing long-term prospect at the camp.

With the size and length of most premiere NBA shot blockers and the potential (albeit raw) skill set to play as a stretch four down the road, Bamba is a tantalizing prospect that will be followed closely as he continues to develop both physically and skill-wise. Sporting a reported 9' 5 standing reach, Bamba already has the length to be an elite rim protector as his instincts and reaction time continue to improve. For perspective, Bamba's reported 9' 5 standing reach would be the 2nd highest measurement among NBA Combine invitees in the last five years, second to only Rudy Gobert (9' 7) and tied with Robert Upshaw.

It's not just Bamba's length that makes him so intriguing, however. Although he's still getting used to his long limbs, Bamba moves with very good fluidity as he's able to run the floor and spin effortlessly for a player his size. Bamba shows very nice touch and mechanics from the perimeter and is fairly comfortable handling the ball  evident by his ability to grab a rebound on one end and push the ball in transition.

While the physical tools and potential skill set are tremendous, Bamba is still extremely raw on both ends of the floor. He doesn't have great fundamentals defensively and often leaves much to be desired in the reaction time/twitch and motor department.

Bamba also has a tendency to get down on himself and hang his head after mistakes, although that can be common for some players his age. Although he's only 196 pounds, Bamba plays with a level of toughness you don't usually see out of player as thin as he is. He's not afraid to mix it up on the interior and, although it only comes in spurts, has some edge to him that could be beneficial down the road.

Bamba is far from a polished prospect on both ends of the floor. How his body fills out will play a bit role in how he's able to mature as a prospect, as will the development of his skills and overall basketball instincts. Only time will tell what Bamba will turn into, but it wasn't tough to tell that he has as high of a ceiling as any player at the Nike Academy.
Read full article