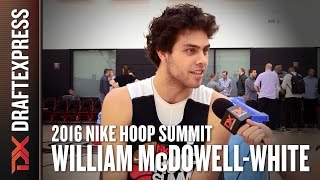 McDowell-White had an up and down week in Portland, culminating in a somewhat disappointing in the game, scoring just 5 points with 2 assists and 6 turnovers on 2-8 shooting from the field in 25 minutes.

He proved to be a willing distributor in practices, moving the ball utilizing his excellent size and strong court vision. He had a difficult time with the speed and length of the US guards, though, particularly when pressed or trapped, being forced to turn his back to his opponent frequently to avoid having the ball ripped away. While he shows potential as a passer, McDowell-White is still learning the nuances of the point guard position (which he readily himself admits), and he looked overwhelmed at times with the level of competition he faced in the game.

As a shooter, he showed some glimpses of being able to develop into a reliable perimeter threat, especially with his feet set from the corners, but is still fairly inconsistent overall. His mechanics aren't the most conventional you'll find, and he's streaky shooting off the dribble.

Defensively, McDowell-White is willing and active, showing quick hands and instincts getting in the passing lanes. Still, his average 6'5 wingspan mitigates some of the advantage he has as a bigger guard.

At an early stage of his development, McDowell-White is still figuring out how to put all his tools together and become a more consistent player on both ends of the floor. His focus and confidence seemed to waver at times throughout the week, as he didn't always looked as locked in as you might hope, but considering he's yet to turn 18, that's probably not all that surprising.
Read full article

With an almost even height-to-wingspan ratio, McDowell White lacks length, but has above average height for a point guard.
Read full article

Strengths:
-Great size for a PG. Very strong frame that continues to fill out.
-Excellent pick and roll player. Strong ball-handler who uses changes of speeds and directions. Finds teammates off the dribble with bounce passes, lobs and kick-outs. Extremely creative with the way he distributes the ball
-Will make an occasional catch and shoot jumper
-Has the size to defend either guard position

Weaknesses:
-Lacks a degree of aggressiveness at times. Doesn't always look comfortable improvising. Needs structure and guidance.
-Somewhat introverted. Doesn't have much of a court presence in terms of leadership skills.
-Jump-shot is still a work in progress. Has some side-spin action and a bit of a hitch in his release at times.
-Needs to improve off-hand.

Outlook: Top-shelf college prospect. Seems to be making significant strides with his basketball IQ and skill-level. Started off slow but was extremely impressive in the last two days of the camp. Size and passing ability gives him a chance to emerge as an interesting prospect down the road.
Read full article

Matt Williams
@DraftExpress
-Australian point guard William McDowell-White brings impressive creativity and athleticism to the guard position. Still working on the consistency of jumper and decision makings, McDowell-White played up at last summer's U19 World Championship, and showed off great versatility and upside. He is being recruited by a host of colleges and would likely be considered one of the top foreign recruits available for the NCAA ranks.
Read full article

Strengths:
-Good size for a guard. Strong frame
-Terrific athlete
-Great first step and overall quickness
-Beats opponents off the dribble without a screen. A jet with the ball
-Very good in transition
-Solid ball-handler. Can play at different speeds. Plays quite a bit of pick and roll
-Creative and unselfish. Finds open man. Makes some very crisp passes, particularly in drive and dish situations
-Extremely competitive on defense. Terrific lateral quickness. Moves feet well and puts strong pressure on opponents. Can already defend 2-3 positions effectively. Gets in the passing lanes frequently. Among the tournament leaders in steals.
-Very good rebounder for a guard.
-Shows potential as a shooter. Ball comes out relatively smoothly at times. Made a number of shots with feet set in Crete. Not a non-shooter by any stretch.
-More than two years younger than many of the players at this tournament

Weaknesses:
-Unpolished offensively at this stage
-Struggles to finish effectively around the basket.
-Needs to do a better job of drawing and finishing through contact around the basket. Not very crafty with his finishes at this stage. Drives to the basket without a plan
-Very turnover prone. Wild with the ball. Makes questionable decisions.
-Shooting mechanics are not consistent. Sometimes shoots a slingshot jumper.

Outlook: Forced into significant action due to the large number of players who declined to play for Australia at this tournament. Handled himself very well despite playing up two years. Showed some great flashes of potential. Appears to have a substantial amount of upside left to tap into with his terrific size, athleticism and creativity with the ball. Looks like a hard worker and a good teammate. Likely on the NCAA track. Will get recruited at the highest levels of college basketball.
Read full article

Strengths:
-Strong frame
-Solid athlete
-Nice quickness in open court. Very effective in transition
-Solid ball-handler. Played some PG at this event
-Can create his own shot in the half-court
-Doesn't have best shooting mechanics but can make an open shot (only six attempts in four games)
-Smart player. Plays under control. Finds the open man effectively
-Rebounds well for his position
-Extremely young. Only 16 years old

Weaknesses:
-Will be undersized for a wing player if he doesn't grow more
-Body is already very mature for his age
-Average wingspan

Outlook: Son of a longtime Australian Football player. Had an outstanding weekend at adidas Nations, hinting at some very interesting things to come. Scored very efficiently all week long (20/26 inside the arc). Has the making of a versatile framework of skills to go along with solid athleticism and a nice feel for the game. Could be an interesting prospect long term, particularly if he grows.
Read full article